What is Mysore style Astanga Yoga?

Mysore style Astanga yoga is a traditional method of practicing Astanga yoga, which is a form of yoga that focuses on the progressive series of postures, or asanas, linked with the breath. It is named after the city of Mysore in India, where the practice originated.

In Mysore style Astanga yoga, students practice at their own pace, with the guidance and support of a teacher. Each student has their own individualized practice, which is tailored to their specific needs and abilities. The teacher provides verbal adjustments and assists students as needed, rather than demonstrating the entire sequence for the class.

One of the unique aspects of Mysore style Astanga yoga is the use of a traditional counting system in Sanskrit, which helps students to memorize the sequence and to synchronize their movement with their breath. This counting system is an integral part of the practice, and is something that students learn and develop over time.

Benefits of the Astanga Yoga practice

What are the difference from other yoga styles?

There are several key differences between Mysore style Astanga yoga and other types of yoga asana practice: 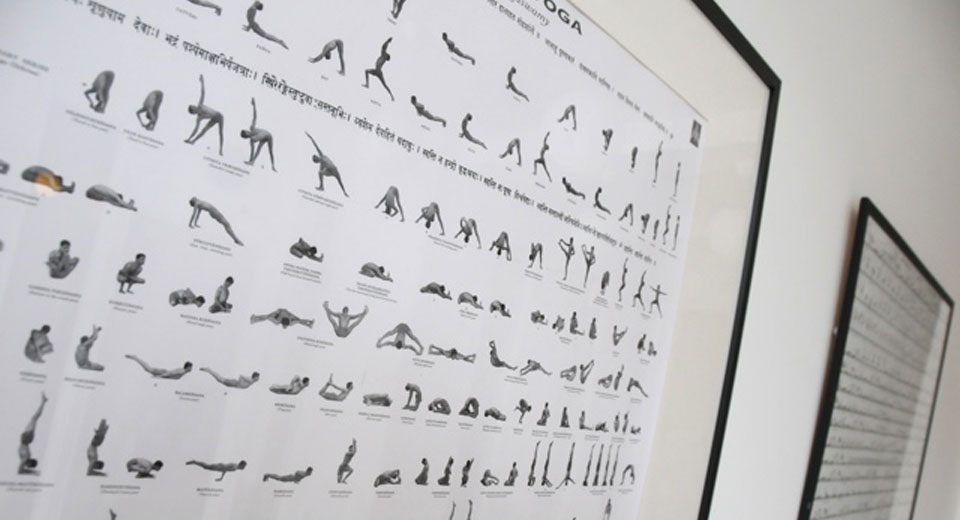 What are the different series?

In Ashtanga Yoga, Vinyasa refers to the specific sequence of movements that is used to transition between asanas (yoga poses). The Vinyasa sequence typically involves moving from one pose to the next by flowing through a series of movements that are linked together by the breath.

In Ashtanga Yoga, the Vinyasa is an important part of the practice, as it helps to create a flow and rhythm to the practice and helps to link the poses together in a cohesive way. The Vinyasa also serves to heat the body and build strength and stamina.

In addition to the Ashtanga Vinyasa, there are many other Vinyasa sequences that can is used in the practice of Ashtanga Yoga. The use of Vinyasa is a way to create a fluid and dynamic practice that helps to cultivate strength, flexibility, and mindfulness.

What is Tristhana - the three places of attention?

In Ashtanga Yoga, Tristhana refers to the three places of attention or effort that the practitioner is encouraged to focus on during the practice. The three elements of Tristhana are: asana (yoga pose), pranayama (breathing technique), and Drishti (gazing point).

Asana refers to the physical practice of yoga poses. In Ashtanga Yoga, the asanas are performed in a specific order, and the practitioner is encouraged to focus on proper alignment and form in each pose.

Pranayama refers to the practice of controlled breathing techniques. In Ashtanga Yoga, the pranayama practice is typically integrated into the asana practice, and the practitioner is encouraged to focus on the breath and use the breath to help regulate the flow of prana (life force energy) in the body.

Drishti refers to the specific gazing points that the practitioner is encouraged to focus on during the practice. The use of a Drishti is believed to help improve focus and concentration, as well as to help improve balance.

By focusing on these three elements, the practitioner is able to cultivate a state of concentration and awareness that is necessary for the practice of yoga. Tristhana is an important aspect of the Ashtanga Yoga practice and is something that the practitioner is encouraged to focus on throughout the entire practice.

In Ashtanga Yoga, Bandhas are specific energy locks that are used to control the flow of prana (life force energy) in the body. There are three main Bandhas in Ashtanga Yoga: Mula Bandha (root lock), Uddiyana Bandha (upward flying lock), and Jalandhara Bandha (chin lock). Each of these Bandhas is associated with a specific area of the body and has a specific physical and energetic effect on the body and mind.

Mula Bandha is associated with the pelvic floor and is activated by contracting the muscles of the perineum or anus. This Bandha is believed to help cultivate stability and support in the lower body, as well as to help improve digestion and regulate the menstrual cycle.

Jalandhara Bandha is associated with the throat and is activated by drawing the chin towards the chest and pressing the back of the neck against the spine. This Bandha is believed to help regulate the flow of prana in the head and neck, as well as to help calm the mind and improve concentration.

I bow to the two lotus feet of the gurus,
Through which the understanding of the happiness in my own Soul has been revealed.
My ultimate refuge, acting like a snake doctor,
For the pacifying of the delusions caused by the poison of cyclic existence.

Who has the form of a human up to the arms,
Bearing a conch, a discus and a sword.
White, with a thousand heads,
I bow to Patañjali.

May the rulers of the earth protect the well-being of the people,
With justice, by means of the right path.
May there always be good fortune for cows, Brahmins and all living beings
, May the inhabitants of all the worlds be full of happiness.
Oṃ Peace, Peace, Peace!

“Yoga is an invaluable gift from our ancient tradition. Yoga embodies unity of mind and body, thought and action. Yoga is not just about exercise; it is a way to discover the sense of oneness with yourself, the world and the nature.”

Narendra Modi, the General Assembly of the United Nations June 21, 2014